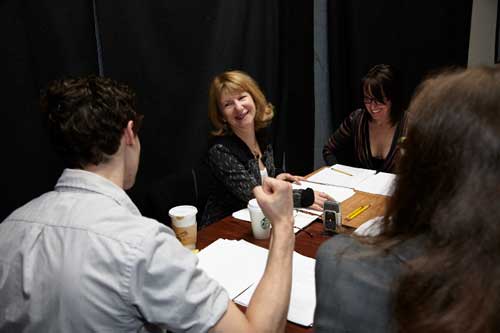 My audio career began in Sydney at the Australian Broadcasting Corporation where I became Executive Producer of Radio Drama. After that I trained as a documentary and feature maker and went back to England working for all the BBC radio networks. I was involved in a fascinating cornucopia of shows, styles and subjects from a kids show ‘In the News’ to World Championship basketball reporting.

I moved to the US, continued to work for the BBC and added reporting and producing for American public radio stations which included classical music, science and travel shows.

I was the senior producer in the pilot phase of the Peabody winning arts show Studio 360 and then became a WNYC senior arts reporter/producer. I hosted several New York arts live events at Symphony Space and Lincoln Center Outdoors.

I was invited to set up an independent company contracted to the BBC in 2005. Corporation for Independent Media or CIM is a hub for creativity coaching, audio production, PR, media lecturing and mentoring. We make drama and documentaries for the BBC.

I trained at New York University with Yana Blackwelder and Sharon Good and have taken courses with Eric Maisel and Amy Porterfield. My work as a coach is an extension of what I have learned as a media employer, audio artist, writer and lecturer for three decades.

My podcasting career started way back in 2008 making educational podcasts for the University of Edinburgh. I’ve been a podcast mentor for the Association of Independents in Radio AIR. I’m an Executive Producer overseeing shows in Audio UK.

Awards include a Gracie, a Sony, a BBC Silver for Best Drama Producer and several Gold awards at the New York Festivals.

Many of my podcasts are available on Audible, BBC Sounds and Soundcloud

I hold a BA, MA and a Post Graduate Certificate of Education from The University of Cambridge.

You need to take this first step to help me help you!

To get started, simply email me. I will work with you to create the best plan for you, taking into consideration your time and your budget.

Let's talk about how to achieve your goals.