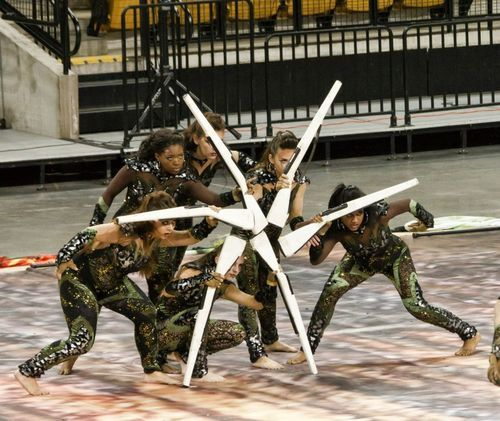 Sometimes you arrive at an interview where you feel relaxed and prepared and are looking forward to a chat with professionals. It’s the point in the process of making a radio show when you have a lot of interviews under you belt and you already feel a bit of an expert in the subject.

So it was when on sunny day in March 2019 that I arrived at a suburb of San Diego outside a bungalow with a porch where rainbow flags were draped and I felt that the vibe was both celebratory and assured. The front garden was colorful – everything seemed to say ‘this is home and we are proud’.

The three men with tattoos and bling and round cheerful faces sat around a living/dining room table. One had driven 2 miles for the interview so it would be a long day for him. I felt grateful and excited to press record as we kidded around…

It was not long to go before the National Color Guard championship in Dayton Ohio.

These guys were choreographers for the Color Guard and in addition one was the Education Director of the national color guard organization. I am not putting that in caps because this is not a story about that activity.

They offered to show me videos of some of the shows they had conceived. A choreographer/director of each high school Color Guard team is the head honcho. They are tasked to come up with the story line, theme, music and design concept. The high schoolers perform what has come out a grown up’s head. Some teams get a say and get to work as a group on their story but most don’t. It’s all tightly timed and every movement fits into tableaux and sequences that mean the kids have to know the routine in every detail.

The Color Guard started in the military. They marched with the flag carrier ahead of the troops. Today they perform at football games and now have a Winter activity where they don’t have to please football crowds and can compete against other teams doing more complicated moves as they toss and twirl flags, sabers and wooden rifles. Every team has to use two of the 3 props – the rifle, the flag and saber. Most give their routines a title and story line, sets that they move across the tarp and bright costumes.

So the choreographers suggested at one stage in the interview that it would make sense to watch some videos of previous group routines that they’d choreographed. The second dance was to beautiful Mahler music. I sat up and peered more closely at the laptop. People were goose stepping and they had armbands. There was a girl in a white shroud kneeling and begging and they beat her until she collapsed, and they goose stepped out.

I said to the 3 men around the table who were beaming. ‘That was a swastika you made on the ground’ (the kids and weapons in a pattern). ‘No, they said, it might seem like that but it isn’t’. ‘Those are armbands.’ I said. ‘Well,’ they said ‘a lot of uniforms have them’. ‘They killed a civilian’ I said and they said ‘yes but this dance is called  The Good Soldier’. And they replayed the end. After everyone exits, one boy comes in and takes off his uniform and lays down his weapon. So that makes it OK?

Later I was told that many parents and teachers objected, some walked out and this team was told to ‘tone it down’ But it was still performed and the choreographer who sat opposite me proudly has it on his website.

I walked out blinded by the sunshine and was too drained to figure out where I was going.

Eventually I got to San Diego Zoo and could tell an Uber where I was and where my hotel was. I showered for ages. I had a cocktail. But that was the beginning. I couldn’t get rid of my shock.

What else is behind cheerful front doors?

I didn’t include any of that in the program that I delivered to the BBC. This was a music documentary for the BBC World Service. I had pitched it as ‘feel good’ piece. ‘Here is a small town team activity where anyone can take part and where the whole community helps out,’ I had told the Commissioner when I pitched the idea and he had answered (quite unusually)

Over the next months, I listened to that tape several times. I played it to my husband and he literally screamed for me to stop.  It’s like a stain that has seeped into my body.

Now that the election is close and there are so many news reports about lines around gun stores and more stories about far right activity of Boogaloo groups and Proud Boys, I feel that I peeked into that territory in March 2019 but did not reveal my tape. I am ashamed. We bow to the tone and style of the broadcast slot – it would have been way to complicated and too much of a tangent to include that tape. However don’t we also have a duty to find a place for a newsworthy story?

But I am not a news reporter.

I don’t have obligations.

All of us who work outside news at many times when collecting audio, have come across people and stories that should be exposed.

I want to talk about that day. Well now at least here I have scratched the surface. 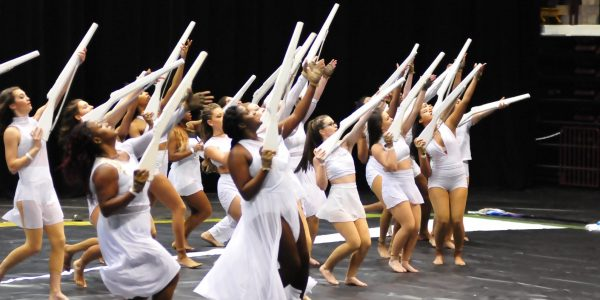