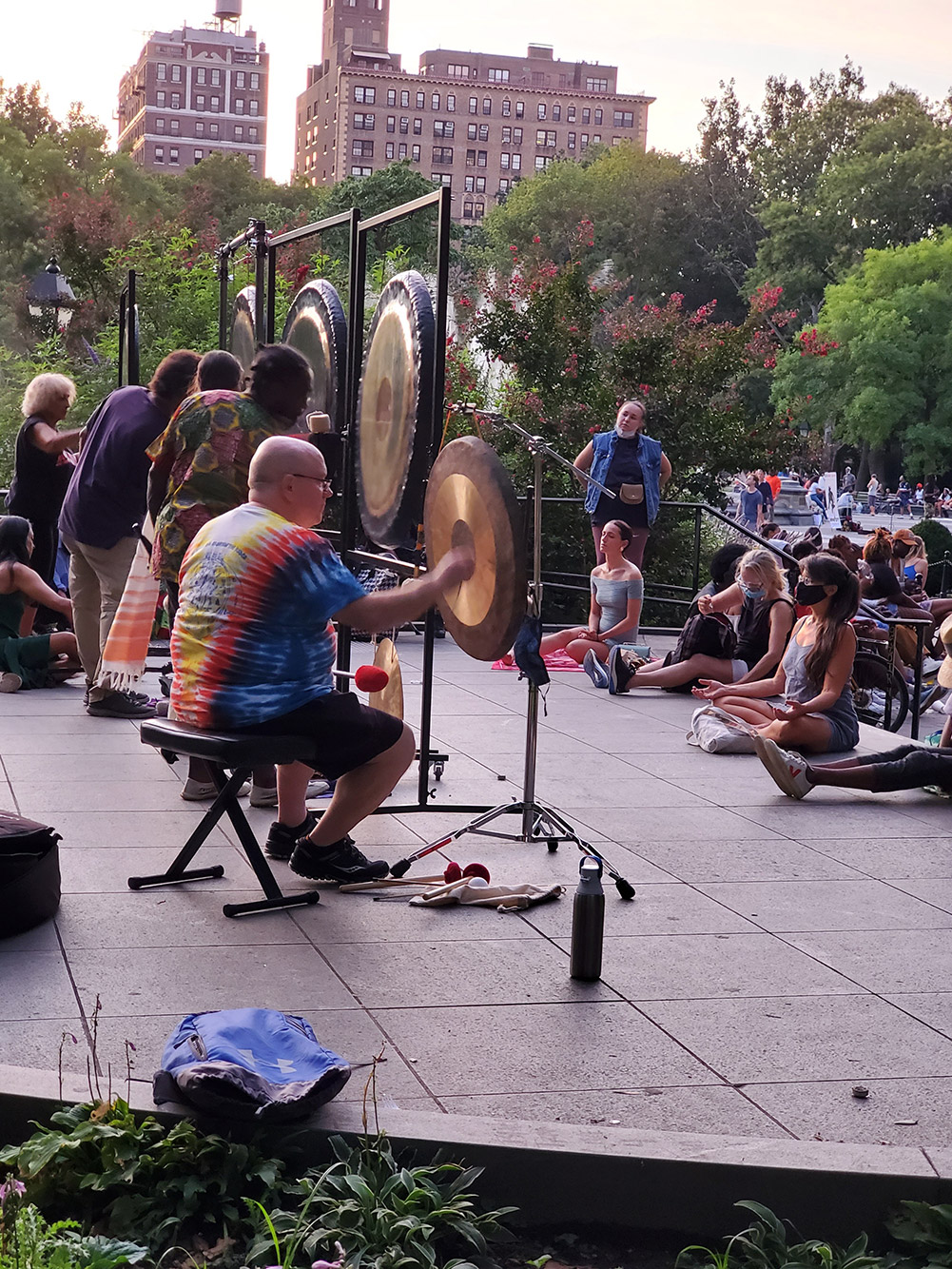 Here are some practices I have discovered over the years of making audio drama.

I’ve added some links from my work. You only have to listen to a few seconds for each example.

Sounds can be designed to break up scenes and show that time has passed. Or because you want to go into a different mood/place. Usually about 2 or 5 seconds if it’s a sound.

It could be a woosh or a swoosh think HBO swoosh or pulsing sounds or droning sounds but I like to create a specific composed group of sounds and often I don’t bleed it into the next scene.

The sound bridge for me is usually a standalone and so all the more reason for taking care with crafting it.

I might take a musical phrase but pick 3 different notes within it for different bridges. So, there is consistency but it’s barely apparent. I might take a theme and switch it up to jazzy, bluesy, solo instrument/with echo etc depending on what’s coming next. I like working with a composer. If they use themes from their back catalog it is fast and cheap. I say something like ‘make that more staccato’ or just ‘dreamier’ and we keep working sending small mp3’s via email. These audio bridges can be anything from 3 secs to 30 secs.

For ‘The Hours’ which is an adaptation from Michael Cunningham’s novel where three women are bound together in different times and places by a Virginia Woolf novel, I took a Schumann theme and asked the composer to play it on the piano and then do different digital versions that would suit each woman’s space. If you listen at 18.28 to 18.50 you hear the theme change into a Latin version as it goes into a new scene.

This is using sound to give the scene some realism – enough but not too much. Your audience will register each sound immediately and give it meaning. But you only need to pick one of many sounds to indicate something. Perhaps a character is having a drink – instead of pouring (it often sounds like peeing) you could have ice clink, or the character talks when swallowing or a glass is put down on hard surface.

I dispense with most footsteps. I use the actor physically moving closer on or off mic to indicate movement. That isn’t to say I don’t make the actor move – I’ve recorded someone doing cartwheels.

And the odd live footstep is good especially in historical content. We don’t often have shoes that make sound today. I will ask the actor to come in with hard soled shoes if I need to record a few footsteps.

I also prepare different scene background ambient scene sounds for the actors to improvise. People in a bar or waiting for a concert or at a rally but it’s important the words are not really identifiable. I usually have to hold the actors back!

Some ‘realistic’ sounds are of course not. For a train in current Russia going through the countryside rattling along, I’ve used china plates and cups jiggling on a rocking table. Here the train has bootleg liquor that smashes as the train has to halt. The china breaking was better than bottles. Usually for the desired effect less if more. I once had an intern smash a mirror for a mirror breaking effect but it sounded like a spaceship diving into a glacier.

From this drama Circus Train by Louis Nowra:

You don’t do foley on the spot (spot fx) as much anymore because you make most foley in post. However there’s something amazing about doing selective spot fx. And sometimes it isn’t even about making a sound! I’m thinking of a time I gave a blanket rolled up for an actor to rock her baby – her voice changed and lilted and we got the maternal voice we needed.

I do bring objects into the recording session. Bananas to eat, stiff sheets to rustle for a sex scene (not flannel sheets – and the more starched the better!) a backpack to zip up and swing over the shoulder…all very hard to get right and timed right and synched with the voice in post and so these are good to get when the actors are there. Sometimes we do the foley in the studio after the actors have gone.

I think it takes forever to find the right sound from SFX libraries. The right door, gunshot, car stop, crickets etc so it really is best to record your own especially if it is a key motif in the drama.

4 The Sound of Silence

Silence is under used. People are afraid that an audience will think there’s been a tech error. I think 6 seconds of silence won’t have people panicking and it can be used to very good effect. If you think about it we often have pauses in conversation. Keep room tone of course. Sometimes you might want to use a little breathing but use it sparingly – it’s cliched. Silence leaves a thrilling space for the audience’s imagination.

And creating a drop out can be terrific. Stewing in silence is dramatically amazing. I like fading to black. I like differing the way I move from one scene to another – never having a formula.

The last few minutes of this drama illustrates the use of silence to underscore what’s happened:

5 To indicate internal dialogue or a dream/nightmare

Here you can be spacey, treat the voice to match the background. Here you have license to be impressionistic, to have a sound wash (think of a watercolor background) to have saturated sound or spare sound. I often zoom into what the dream is about. Like a dream about a troubled childhood, might call for a montage of piercing cries, lullabies in minor keys, perhaps a distorted sound from a toy or a something that we know the character is scared of. I like going from real to surreal and back again.

I like to use different pulsing effects. A standard device that works if you are very subtle of course are heart beats. They are so rhythmic. Use them on the cusp of audible. Use a low frequency. An analogue clock can be good, again if subtle and layered and only if appropriate to the space. An ear ringing sound that is not annoying also works especially layered. Add new pieces of sound information, layer as if you are layering clothing and taking it off in changeable weather. That makes the background more immersive.  You ‘ride’, each layer so that one is dominant and then another but there’s no obvious pattern.

Think of the comic pratfall in a cartoon – instead of hearing a real duck jumping – you might use a cymbal. Not only used in comedy. David Lynch does this sometimes without making his characters caricatures.

Percussion instruments can deliver sound that the brain thinks is real. A Tibetan singing bowl for wind, a drum for thunder, cymbals for scrap metal – the performer needs to have a light touch. If you have a mix engineer who has a box of instruments  – do play around.

I had to cut out a flower seller character because her Cockney accent was so bad in one audio drama not that long ago. So we used crinkly flower sounds to indicate where our heroine was – i.e. buying flowers in a stand and a bouquet is being made as she waits. We managed also to keep in a grunt and some hmms from the actor we cut out and these noises over the crinkly paper showed that something was happening and the content in the scene was there.

We also often use effects like a little reverb to cover up last words in a scene that needed to be more dramatic. It expands them and they linger and cover up an actor’s lack of energy or passion!

A sound bed that is the opposite of real. Like for the sound of someone jumping off a bridge we might choose not have the obvious sound of the body hitting the water but say a daybreak chorus of birds. It can create more drama. It can be very effective. It’s so not what the audience expects. The sound seems indifferent to the tragedy. This is used a lot in horror and ghost dramas.

10 Picking the right music at the top of the drama

For the beginning of an update of the popular Ray Bradbury dystopian story ‘The Veldt’, I wanted something eerie that had a touch of the futuristic that would contrast with the domestic scene that it fades into:

Eva Bittova a downtown NY musician is vocalizing in a weirdly haunting way. I have found that if you approach a composer they may have something that works that perhaps hasn’t been published and you can pay them something and credit them as much as possible. Getting the audience hooked in the first minute is crucial. Starting with music rather than coming in hard on speech is always a good thing.Try out lots of music possibilities, even though it takes time.