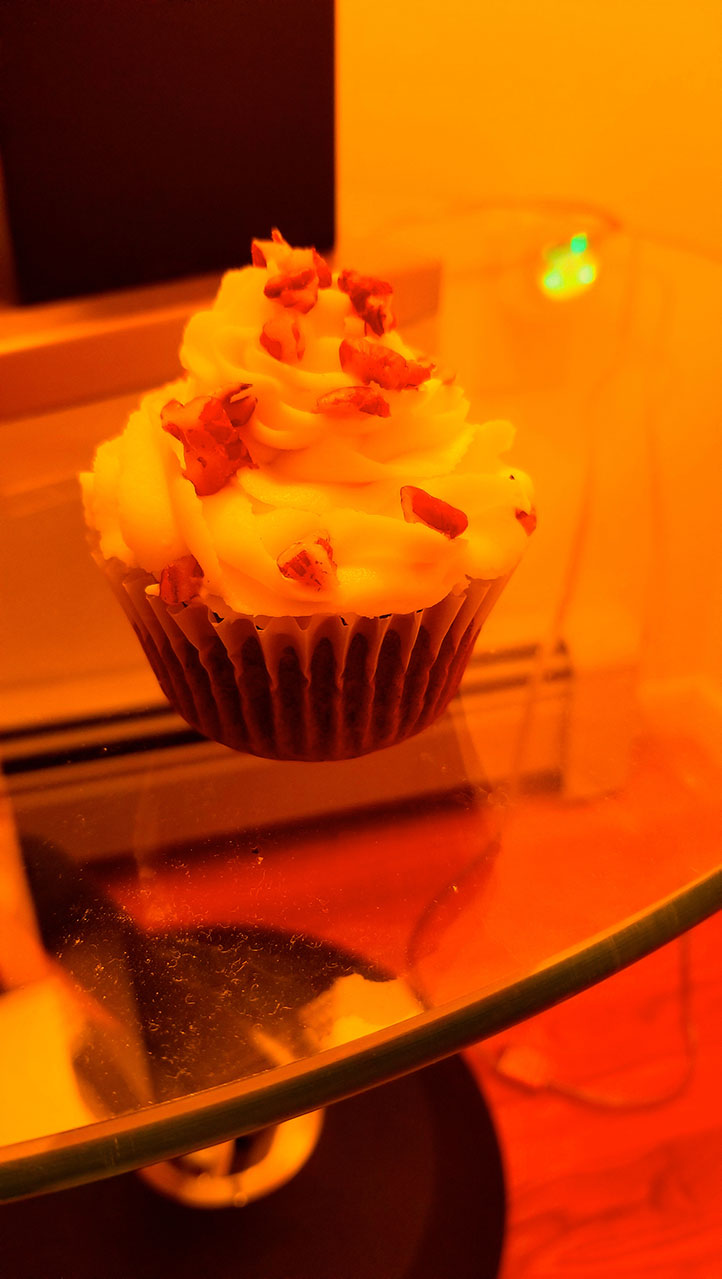 I have a weakness for cupcakes. They are so pretty. Actually the anticipation is better than the consumption. At my wedding in 2012 we had a ‘cake’ that was a sort of tree of cupcakes. I was told that cupcakes were well out of fashion but they are less sweet than all the American wedding cakes we sampled. And the kids who were there at the event loved it and there were lots of pictures.

The cakes were from Magnolia bakery. They had purple, magenta and orange ‘disco dust’ on them. These were the colors of the tablecloths and decorations. I don’t think Magnolia gets this choice of colors that often. Disco dust is Magnolia’s term I think. A light powder of glittery sprinkles that were not hard and crunchy like most sprinkles. I have ordered a box now and again for anniversaries. You have to ask specially for disco dust.

Meditation is something I have been working on for about four years. I know you are not supposed to ‘work’ on it. However, I can’t really see it any other way and so I have to put up with this contrary thought. I read a lot about mandalas and focusing on a totem or a crystal and tried a bunch of those ideas. I gravitated from trying those out to stumbling on one that speaks to me more. I have been trying lately to imagine a whirl of color around me. Gold first, as in a swirling of gold glitter circling me as if in a snow dome. Then I think magenta, orange and purple. One at a time not necessarily in the same order. Bathing in disco dust!

I try to slow the circling down and establish a rhythm and it can work for about five minutes. That’s some success for me. In that time I can focus entirely on the disco dust and it makes me feel like a princess. To be honest I have to stop because I usually have to fight back thoughts about how silly this might seem and isn’t what I am doing ridiculously girly and cutesy. Am I imagining a  good fairy coming to sprinkle the dust? Enough already. What is this? I never played with Barbies or loved Disney.

And here’s the deep down confession do I deserve to be bathed in disco dust?

A prop I have found recently that helps is lighting an incense cone. This lasts for about thirty minutes and so I don’t use a timer. It’s more organic and it’s less intrusive and it’s fun to see it burn down. I love the original joss stick smell of Nag Champa. It’s woodsy with a little jasmine. I know it’s hippyish in its aroma. I have been told that I am often  ‘Baezy’. As in Joan Baez who many people haven’t heard of. There are pricey Nag Champa cones but they can be also be got incredibly cheaply as in

If I lose the plot and thoughts rush in fast and I start over thinking, I just stop. I do a little twisting and stretching (while still in lotus position). I know that’s a radical thing to do. You are supposed to just sit through your restlessness. But you are also not to feel that you are ‘supposed’ to do anything. So whatever it takes is surely best?

My disco dust is my attempt at visualizing. Everyone has their own system. Of course the totally correct thing to do is to focus on the breath but that gets tedious. You see I am not a diehard meditator.

I have tried silently yelling ‘stop’ at a thought. Or mentally hitting the thought as in the game Whack a Mole. But as I love that game, this method is very enjoyable and therefore offers its own distraction and so defeats the object of just gently pushing the thought away. So now I am trying something new. Which is where the cupcakes come in. I don’t know how it originated. I haven’t eaten a cupcake in months and months. But it came to me recently.

Something powerful that’s related to the princess theme: I have created an imaginary pink sequined sack at the back of me. I flip a pesky thought into the air and throw it over my head so it lands in the sack and then I pull the sack strings tight.

I know that millions of people listen to the Headspace podcast.

I love the narration. It’s warm and down to earth (that is a weird way of describing a meditation voice because you are more up in the ether than down to earth, but actually it is better than the hushed breathy tones of other guided meditations) and I like the fact that Headspace insists that it is for everyone even cynics.

However a little something that put me off a Headspace exercise was that it described thoughts as cars. It posited the image of sitting by a roadway and gazing at cars going by and letting them pass. The cars are stand ins for thoughts. Sitting by a roadway seemed odd and not conducive to feeling in the safe space that meditation requires surely. Wouldn’t clouds be better?

I like the idea that I have read in several meditation guides of thinking that roots are growing down from the feet and the buttocks deep down through the floorboards. It gives a feeling of anchoring. My knees and thighs tend to twitch a bit at first and the roots image makes me sit up and the twitching eases. There are many root grounding mediations on line like:

For a BBC World Service religion documentary some years ago, I spent time with the US army’s first Buddhist chaplain. We drove from a talk he was giving in Nashville to his home in Memphis and he talked a lot about meditation on the drive. He is a great fan of walking meditations and he was lucky that there was a Buddhist temple in Memphis. He directed his walk to the temple and round it every day. He also said that just plain remaining sitting in a cross legged position was good. “Don’t worry about all this” he said, “just sit and keep sitting and that’s enough. It will all work out.” Comforting to know.